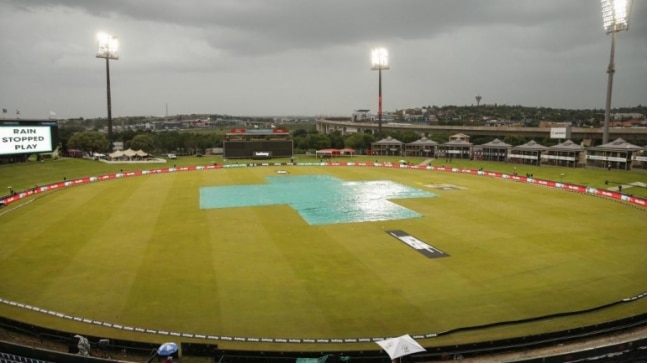 The Netherland were 11 for no loss after two overs in reply to South Africa’s 277 for 8 when play was halted and later abandoned at the SuperSport Park in Centurion on Friday. Rain forced Friday’s first one-day international between South Africa and the Netherlands at Centurion to be abandoned, with the rest of their three-match series in doubt following the discovery of a new coronavirus variant in the country.

The Dutch were 11 for no loss after two overs in reply to South Africa’s 277-8 when play was halted and later abandoned.

The rest of the tour is in doubt with the threat of harsh quarantine arrangements as Britain and countries in the European Union imposed travel bans on Friday in reaction to the new coronavirus variant (Nu B.1.1.529) threat.

A joint statement said a decision on the rest of the tour would be made in 24 to 48 hours.

“Cricket South Africa (CSA) and Koninklijke Nederlandse Cricket Bond (KNCB) are aware of news reports doing the rounds regarding the Netherlands tour to South Africa being cancelled or postponed,” the statement read.

“Both boards can confirm that following updated information, it is highly unlikely that the visiting team will be able to fly out of South Africa over the weekend.”

Kyle Verreynne fell five runs short of maiden ODI century but helped South Africa recover from 24-2 as he featured in a 119-run partnership with Zubayr Hamza, who hit 56.

South Africa’s total was vastly improved by a late cameo from Andile Phehlukwayo who hit six sixes in a knock of 48 off 22 balls.

Click here for IndiaToday.in’s complete coverage of the coronavirus pandemic.