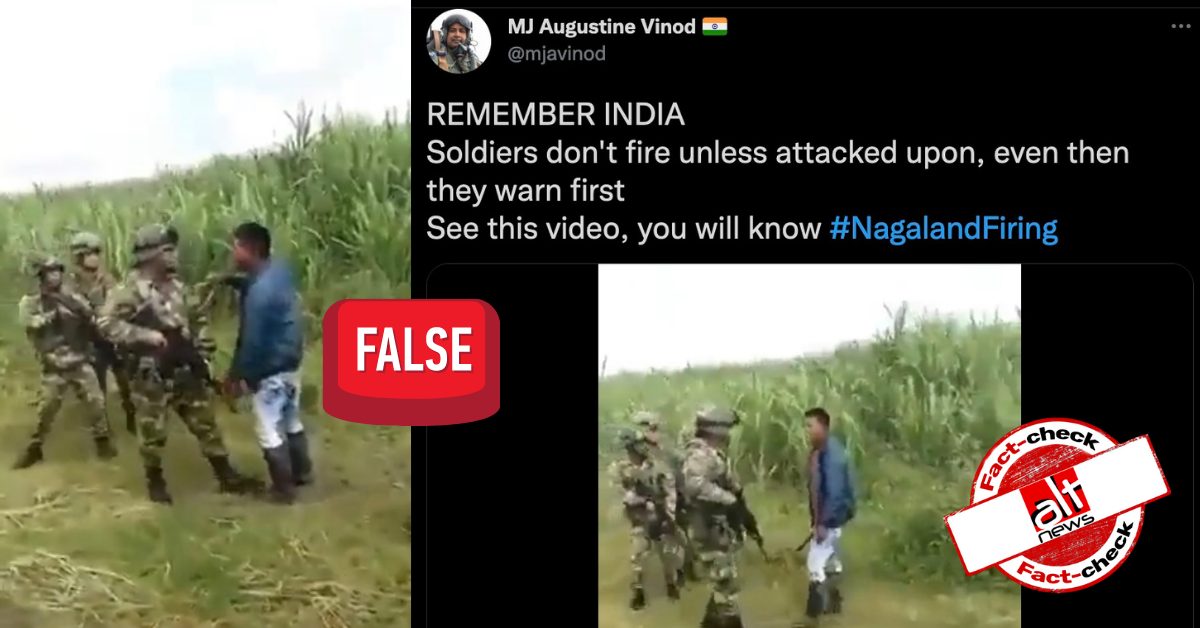 On December 4, a special unit of the army mistakenly opened fire at a pick-up van carrying coal miners from the Tiru area to their village in Nagaland’s Mon district around 5 pm. The Hindu reported at least 15 civilians and one soldier were killed. Two days later, the National Human Rights Commission (NHRC) took suo-motu cognizance of the incident.

Against this backdrop, a former defence officer and life coach A K Naithani tweeted a video that shows two civilians with knives threatening men in the armed forces. In the video, we see the troops firing precautionary shots.

How does one react to such provocation ? Notice the restraint shown by the armed soldiers …… *NOT TRIGGER HAPPY !* …._may draw your own conclusion._ pic.twitter.com/zrYM2L6LI2

When a user asked if the video is from Nagaland, Naithani responded saying, “I have no reason to believe it not being so.”

I have no reason to believe it not being so. The pity is that we have no hesitation in doubting the integrity of our forces

REMEMBER INDIA
Soldiers don’t fire unless attacked upon, even then they warn first
See this video, you will know #NagalandFiring
pic.twitter.com/bFx85XYpn3

Alt News has received several requests to fact-check this claim on our WhatsApp helpline number (+91 76000 11160). The accompanying message is attributed to an army officer “explaining” the civilian deaths.

Alt News performed a reverse image search of the video’s keyframes and found that it was aired in 2018 by Nicaragua-based news outlet Noticias Caracol TV.

Therefore, a video from Nicaragua was shared to justify the death of 15 civilians killed by the Indian army in Nagaland.

False anti-Muslim spin added to attack on college girl in We...

No, Yogi Adityanath did not chide UP Dy CM Keshav Prasad Mau...