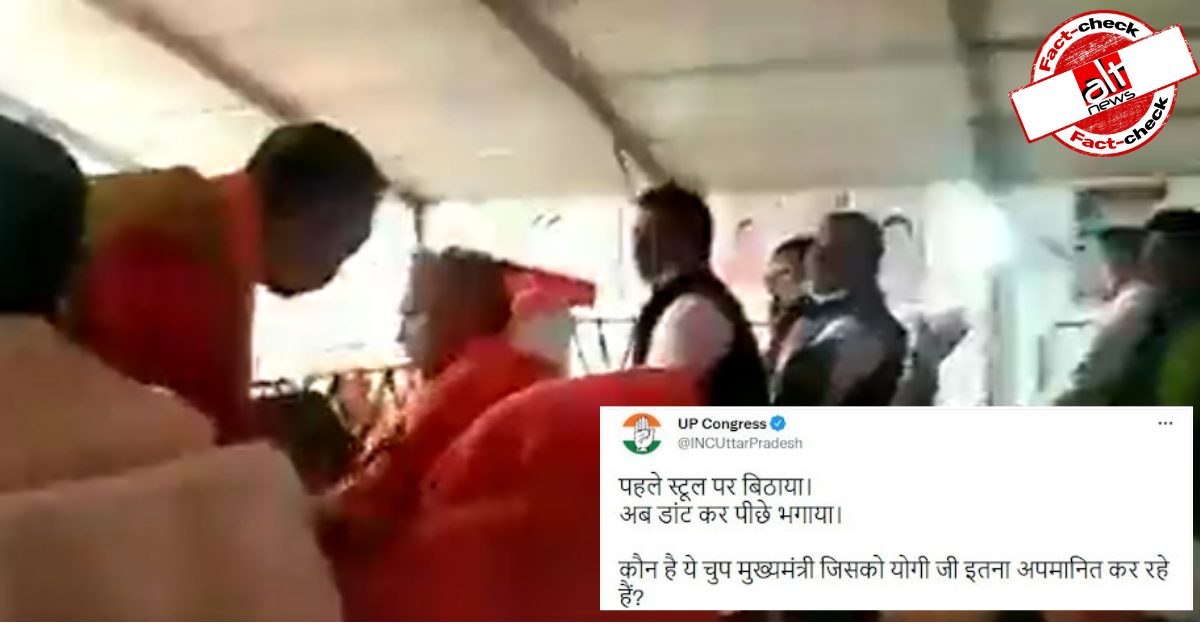 A video of a man coming up on stage to whisper something into Yogi Adityanath’s ear is making the rounds online. The video shows the UP chief minister promptly scolding him and asking him to be seated. It is claimed that the man reprimanded by Yogi was Keshav Prasad Maurya, UP’s deputy chief minister.

Uttar Pradesh Congress Twitter handle shared the video, writing, “First he was made to sit on a stool, and then scolded and pushed aside. Who is this silent chief minister whom Yogi Adityanath keeps insulting?” Though the post did not mention Keshav Prasad Maurya by name, it contained references to events involving him.

Priyanka Chauhan of the Aam Aadmi Party also tweeted the visuals and wrote, “This shows the level of respect Yogi Adityanath has for Keshav Prasad Maurya (Deputy CM of UP)”. (Archive link)

Alt News performed a keyword search and came across a report by Aaj Tak. It stated that the man seen in the video was Vibhrat Chand Kaushik of the BJP, and the footage was taken at an event held in the Bansgaon constituency area where Yogi Adityanath was the chief guest.

We examined Kaushik’s Facebook profile to verify this and found a few other images taken at the aforementioned event. This confirms that the BJP leader was present at this gathering.

We then performed a keyword search on YouTube and found a video from that day posted by the Uttar Pradesh government’s channel. Scenes from the viral video appear at the 10:05 mark. It can be seen clearly that Vibhrat Chand Kaushik gets up from his seat to whisper something into Yogi Adityanath’s ear, before he is told to sit back down.

Journalist Manish Pandey tweeted this video on November 30 and wrote that Kaushik had been publicly humiliated.

We also reached out to Kaushik himself for more information. He confirmed it was he who appeared in the video. He also revealed that he told Yogi something about the construction of a stadium when he was told to be seated by the chief minister. Though his video is widespread with several misleading claims, he himself confirmed that Keshav Prasad Maurya was not present at the function.

False anti-Muslim spin added to attack on college girl in We...