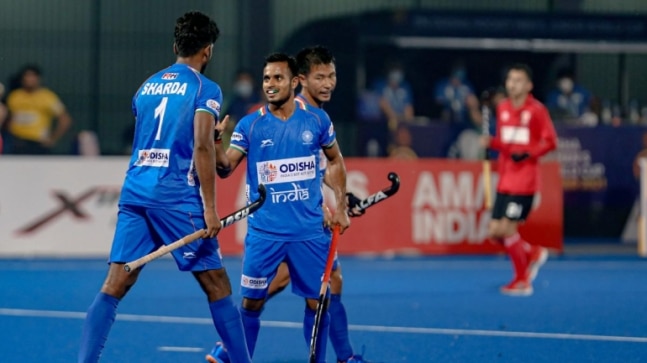 India bounced back in the men’s Junior Hockey World Cup on Thursday with a 13-1 win over Canada in their second Pool B match and put behind the disappointment of their opening loss in Bhubaneswar.

Vice-captain Sanjay and Araijeet Singh Hundal led the way with a hat-trick each while Uttam Singh, Shardanand Tiwai (35th, 53rd), skipper Vivek Sagar Prasad (8th), Maninder Singh (27th) and Abhishek Lakra (55th) also got on the scoresheet with a goal each for the hosts.

Sanjay scored his goals in the 17th, 32nd and 59th minute while Hundal completed his hat-trick in the 51st minute after scoring his first two in the 40th and 50th minute, respectively.

India will meet Poland in their last pool fixture on Saturday.

While Uttam Singh opened the account for India, scoring in third minute, the flow continued till 59th minute. Skipper Vivek Prasad Sagar doubled the lead for India in the eighth minute with some brilliant drive.

Canada then came back strongly and earned successive penalty corners in the 12th minute but didn’t have success in scoring thanks to brilliant defence by Prashant Chauhan. After that India finished the first quarter with 2-0 lead.

Sanjay converted penalty strike in the 17th Minute, taking the tally to 3-0, Maninder Singh added another goal in the 27th minute with a powerful strike from the left flank.

Canada regained some strength during last minute of the second quarter and converted a penalty corner to reduce the margin to 1-4.

The goal fest from the hosts continued after the halftime as vice-captain Sanjay converted another penalty corner in the 33rd minute to increase the lead to 5-1. Within three minutes Shardanand Tiwari scored from Penalty Corner taking the lead to 6-1.

Taking benefit of one more penalty corner in 40th minute Araijeet Singh Hundal scored, 1 more goal to expand the lead to 7-1. Uttam Singh scored his second in the 47th minute with a lightning strike from the right flank.

Canada tried to bounce back in the game after a minute, got penalty corner but were unable to cash on it. The hosts came back strongly and Araijeet Singh struck in the 50th minute with his outstanding shot. Just after a minute, Hundal struck again to give India an almost unassailable 10-1 lead.

Shardanand Tiwary struck his second goal through Penalty Corner in 53rd minute taking the lead to 11-1. The host went on a rampage, capitalising on 2 back-to-back penalty corners in 55th minute by Abhishek Lakra and in 59th Minute by Sanjay.

The record for biggest margin of victory was set twice within hours as big guns Spain, Argentina and Netherlands today thrashed lower-ranked teams at the Kalinga Stadium in Odisha Capital Bhubaneswar.

While Argentina, set the ball rolling by defeating African minnows Egypt with a 14-0 goal, few moments later The Netherlands handed South Korea a 12-5 thrashing to set the record for most goals in a match as both teams combined to produce 17 goals. Followed by Outstanding show by Spain trouncing United States by 17-0.