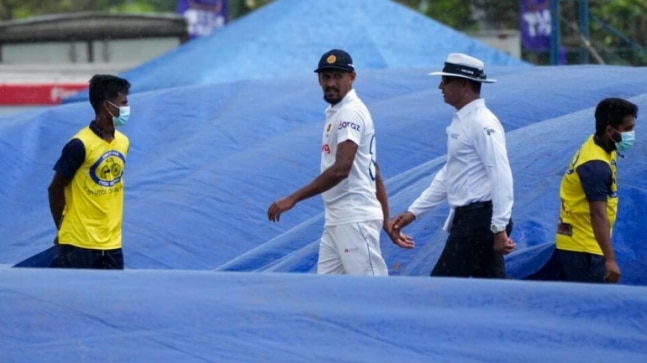 Galle Test: A stroke-filled 39 off 58 balls by Rahkeem Cornwall and a gritty Joshua Da Silva, coupled with West Indies’ first half century partnership of the match between Jason Holder and Kyle Mayers 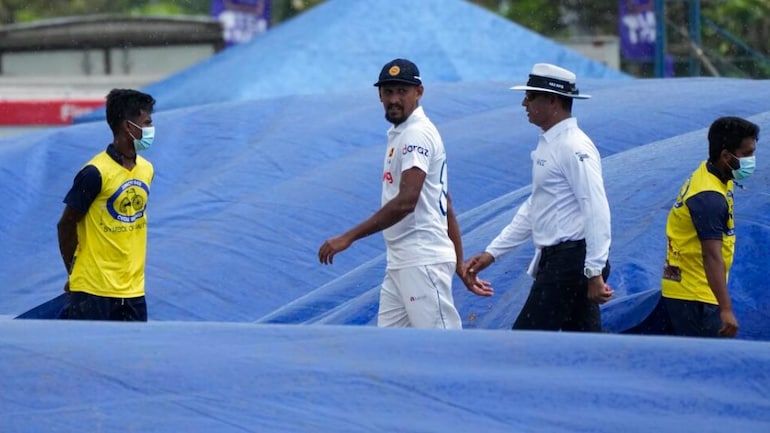 Sri Lanka still remain on top, although the wash-out on Day 3 made it more likely that the match will end in a draw. (AP Photo)

Rahkeem Cornwall’s stroke-filled 39 off 58 balls and Joshua Da Silva’s gritty 70-ball stay helped West Indies reduce their first innings deficit after Jason Holder and Kyle Mayer led the way in helping them avoid a follow-on on Day 3 of the first Test in Galle. Cornwall’s wicket also turned out to be the last act of the day as rain washed out much of the second session and the entire third session.

Earlier, Mayers scored 45 off 62 while Holder made 36 off 60 as the pair put up 63 for the seventh wicket. It was West Indies’ first and only 50-plus partnership after their middle order fell to Pravin Jayawickrama and Ramesh Mendis, who both took three wickets each.

Earlier, on Day 2, West Indies had a 46-run opening stand but Embuldeniya got Jermaine Blackwood for 20 to draw first blood in the post-Lunch session on Monday.

Nkrumah Bonner, who had been impressive in Bangladesh earlier this year, fell for 1 as left-arm spinner Jayawickrama struck.

Brathwaite’s resistance came to an end as Ramesh Mendis removed the West Indies captain before getting the big wicket of Shai Hope in the very next over for 10.

All-rounder Roston Chase, who had bowled close to 29 overs in the first innings, fell cheaply (2) while Jomel Warrican also departed without troubling the scorers much.

Click here for IndiaToday.in’s complete coverage of the coronavirus pandemic.