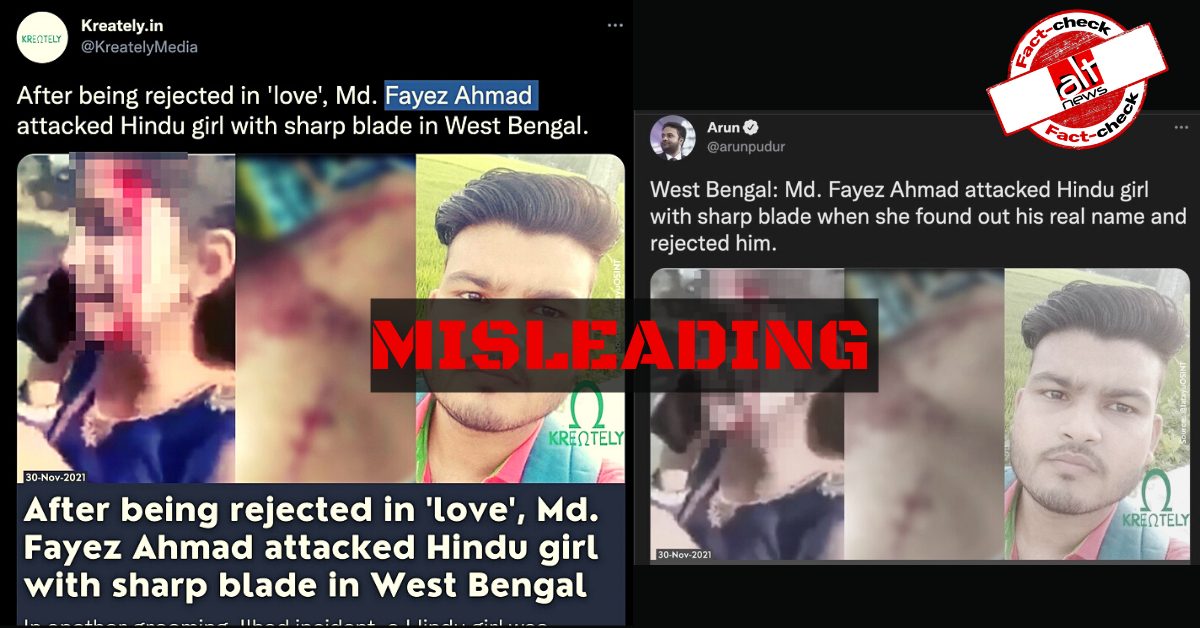 Pro-BJP and communal propaganda platform Kreately tweeted two images — one that shows a woman with a head injury and another picture of a man. The text on the image reads, “After being rejected in ‘love’, Md. Fayez Ahmad attacked Hindu girl with sharp blade in West Bengal. In another grooming Jihad incident, a Hindu girl was attacked yesterday afternoon by one Md. Fayez Ahmad in Kochbihar, Falakata of West Bengal. The girl was reportedly going to her college when she was attacked. Situation remains tensed in the area. [sic]” The tweet received over 3,000 retweets as of this writing.

BJP supporter Arun Pudur also shared this graphic. Prior to this, Twitter user @JatayuOSINT posted a video of the incident with the same claim. Alt News has not included the video due to its graphic nature.

According to local Bangla news outlet Anandabazar Patrika, the incident indeed took place. However, the report does not state the attack was communally motivated. Fajaddin Hossain attacked a student at Falakata College with a knife after his proposal was turned down. Hossain is a resident of the Ghoksadanga area in the Cooch Behar district in West Bengal.

The Telegraph also reported the incident and made no reference to a communal angle. As per the report, both the victim and accused were batchmates. The Telegraph cited that hospital sources informed that the victim received multiple stitches.

SHO Ghoksadanga told Alt News, “Both the victim and accused were from the same community.”

Prior to our report, The Quint had debunked this claim. The outlet accessed the FIR pertaining to the case and included a relevant excerpt — “On 29.11.21 at about 13:30 hours one Fajaddin Hossain s/o Babuddin of Baro Solmari PS Ghoksadanga District-Cooch Behar attacked one Alina Yasmeen (20) d/o Ainul Haque of Dulal Dokan PS-Falakata with a sharp cutting weapon (blade). The incident took place at Dhupguri More college road following a failed love affair between the two.”

The assault on the woman was falsely communalised by Kreately and several pro-BJP accounts on social media.

No, Yogi Adityanath did not chide UP Dy CM Keshav Prasad Mau...