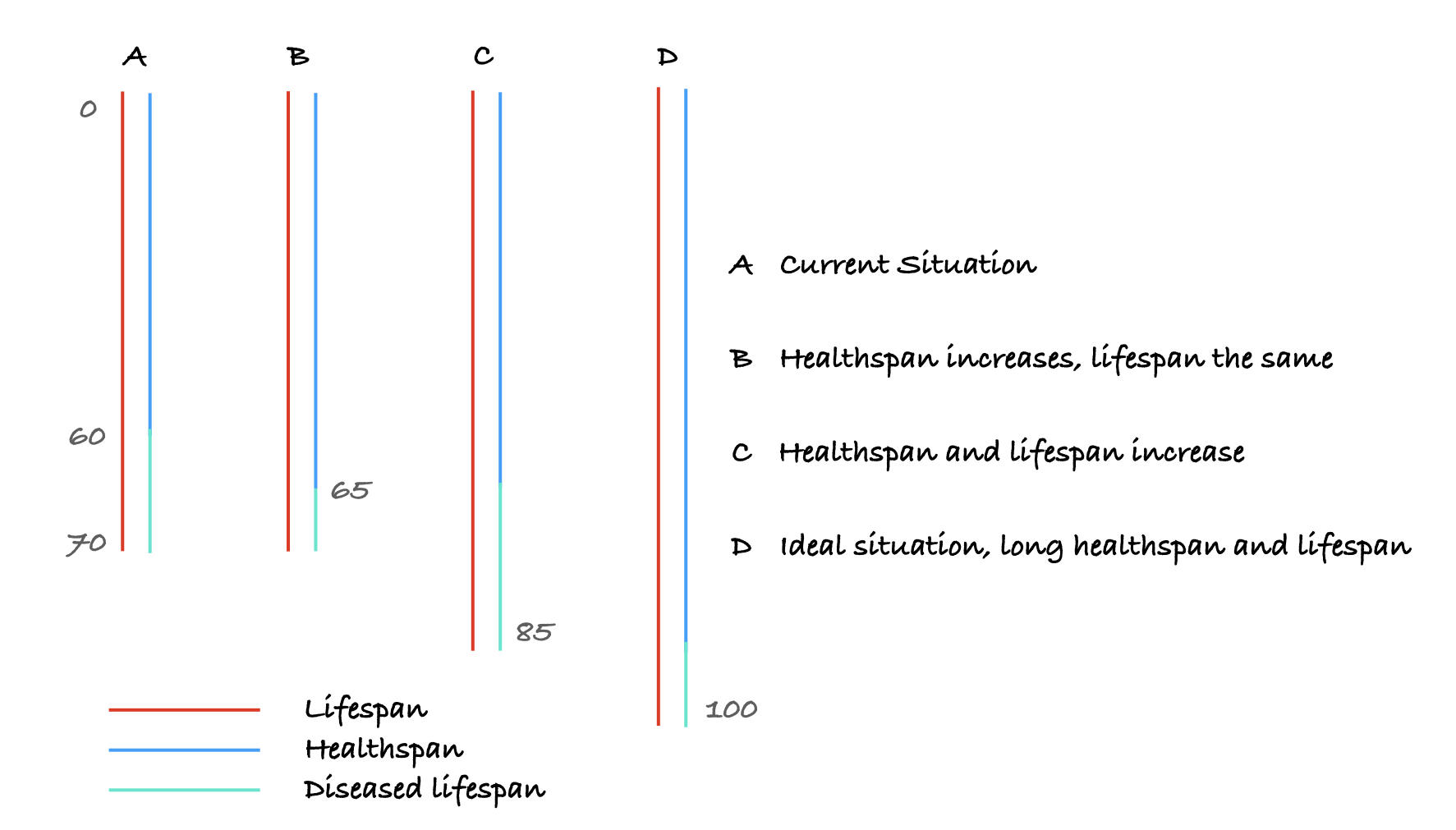 A man said to the universe:

“Sir, I exist!”
“However,” replied the universe,
“The fact has not created in me
A sense of obligation.”

-A Man Said to the Universe by Stephen Crane

The universe, as climate change shows us, does not care how long we live or we don’t. Our lifespan and healthspan are entirely up to us, both collectively as well as individually. I had mentioned in last week’s article that I would explain the concepts of healthspan and lifespan this week and so here we are.

Audio version: A longer healthspan is better than just a longer lifespan

We live longer than ever before. Despite Covid-19, this decade is the healthiest we have ever been, in virtually every country in this world.

In 1809, the population of the world was around 1 billion, with a fertility rate of between 4.5 and 6.2 [1], and a child mortality rate of around 50%, which ensured that the population remained static/stable at that number with births and deaths pretty much cancelling each other out. Today, in 2021, we are 7.85 billion people, with a global infant mortality rate down to 2.9 % with just 4.6 % of these children dying before the age of 15 [2]. Despite our perceptions, and notwithstanding the Covid-19 pandemic, life expectancy and virtually all other health parameters have markedly improved globally as compared to just up to 200 years ago.

This is amazing progress. For over 30,000 years, human health pretty much mirrored the situation in 1809 with high fertility, high child mortality and an average lifespan between 20 to 40 years. And then within a short span of just 200 years, everything has changed. Despite the significant global discrepancies and inequalities due to geographical, environmental and income-related differences, even the poorest of poor countries are better off than just 100 years ago.

How did this happen? What dramatic changes altered the health landscape?

Most people tend to attribute increased lifespan to the advent of modern medicine and improvements in technology like robotic surgery, CT scans and expensive medicines. However, the real reason for increased longevity is socio-economic and political; reduction in poverty, better education, clean water, better sanitation, adequate nutrition, immunization and the use of antibiotics. If we look at a pyramid of effectiveness, improved socio-economic factors at the base have the largest impact, followed by laws (smoking bans, seatbelts, etc), followed by protective interventions such as vaccines and preventive methods such as the use of statins or mammography for the early diagnosis of breast cancer or testing for diabetes and hypertension, treatment by doctors and hospitals [3] forming the apex of the pyramid, having the least impact on the longevity of the population at large.

This is not to say that doctors and hospitals are of no use. They are…but they are important when you fall sick, whereas measures taken to prevent you from becoming ill in the first place are more important. And the longer we live without disease, the longer therefore is our healthspan.

There is a current upper limit to our lives despite our increased lifespans. Very few people in India make it to above 80 and a minuscule number makes it to above 90. There is an exponential death rate after the age of 65, which is why, as we age, we keep seeing people around us dropping off faster and faster.

Moreover, the longer we live, the more is the morbidity associated with chronic diseases that afflicts those of us above the age of 50. We live longer but many of us suffer through this longer life.

What is therefore more important than just the lifespan is the healthspan, which is the time period lived until a major disease, such as stroke, heart attack or cancer affects us, and leads to a life lived with disability and suffering until the end of our lifespan.

Effectively, the longer we live, the more is the chance that we will live with disease and disability. This is the Faustian bargain we have made significantly reducing childhood mortality and adding years to our lives. We live longer, but with disease.

In India, as the diagram shows, our average lifespan is almost 70 years. However, the current healthspan is just 60 years, by which time half of us who have managed to reach the age of 60 will have at least one or more chronic diseases with some disability/morbidity.

If however, our healthspan were to go up to 65 years (scenario B), without a change in the lifespan, we would live a shorter diseased life of just 5 years. If the lifespan were also to increase, which is likely to happen with an increase in the healthspan (scenario C) then we would live longer, but the period lived with disease would also increase.

The trick therefore, is to increase our healthspan and lifespan both, but healthspan relatively more, so that we reduce the number of years with disease to as less as possible, as I have shown in scenario D, where if we could increase our lifespan to 100 years and healthspan to 90 or 95 years, we could compress our years of disease before death to a very short period of time of just 5-10 years.

The previous articles on physical activity, not falling, sleeping well are part of our atmasvasth quest to not just increase our lifespan, but more importantly our healthspan. And that is the goal of atmasvasth and this blog…to figure out how to live not just long, but also healthy, so that we have long healthspans as well as lifespans and as short a period with disease as possible.

Views expressed above are the author’s own.